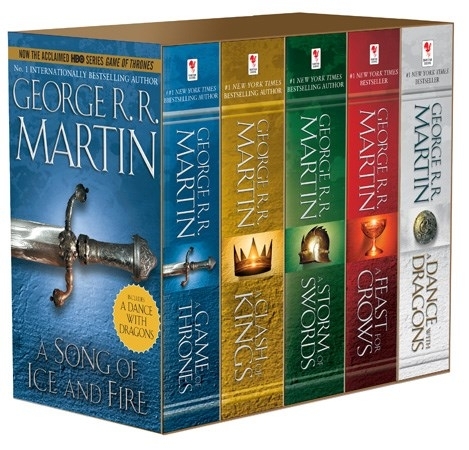 This boxed set includes the following novels:A GAME OF THRONES, A CLASH OF KINGS, A STORM OF SWORDS, A FEAST FOR CROWS and DANCE WITH DRAGONS.

George R. R. Martin's A Song of Ice and Fire series has become, in many ways, the gold standard for modern epic fantasy.

Martin-dubbed the American Tolkien by Time magazine-has created a world that is as rich and vital as any piece of historical fiction, set in an age of knights and chivalry and filled with a plethora of fascinating, multidimensional characters that you love, hate to love, or love to hate as they struggle for control of a divided kingdom. It is this very vitality that has led it to be adapted as the HBO miniseries Game of Thrones.